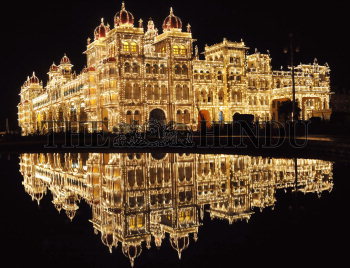 Caption : MYSORE, KARNATAKA, 24/09/2014: The MYSORE PALACE on September 24, 2014. Stage is set for Dasara to unfold from September 25 to October 4 in MYSORE and the main cultural events will be staged in front of the PALACE. Photo: M.A. Sriram