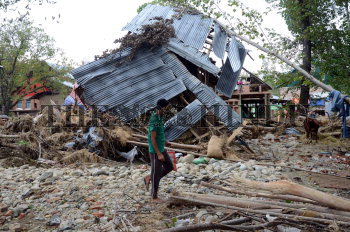 Caption : SRINAGAR, JAMMU AND KASHMIR, 23/09/2014: Kashmiri resident walk past a house damaged by flood at Gutan Village Kulgam District South of Srinagar on September 23, 2014. The village suffered massive destruction as majority of the houses washed away and hundereds of kanals of paddy land getting damaged during the recent devasting flood. Photo: Nissar Ahmad