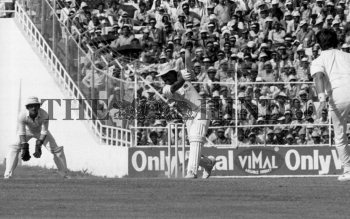 Caption : India's Dilip Vengsarkar drives Ian Butchart in the match against Zimbabwe during the Reliance World Cup 1987 at the Motera Stadium in Ahmedabad on October 26, 1987. PHOTO: THE HINDU ARCHIVES