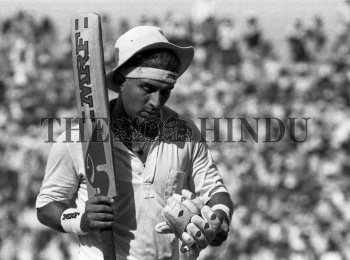 Caption : Indian batsman Sunil Gavaskar, who scored 50, departs after losing his wicket to Peter Rawson in the match against Zimbabwe during the Reliance World Cup 1987 at the Motera Stadium in Ahmedabad on October 26, 1987. PHOTO: THE HINDU ARCHIVES