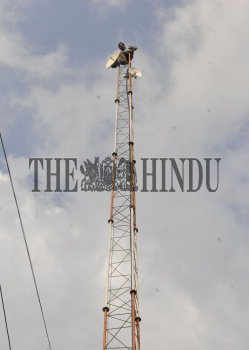 Caption : BHOPAL, MADHYA PRADESH, 20/09/2014: A vendor named Santosh Saini climbed on a city surveillance tower, to protest against the alleged harassment by Bhopal Municipal Corporation, in Bhopal on September 20, 2014. Photo: A. M. Faruqui