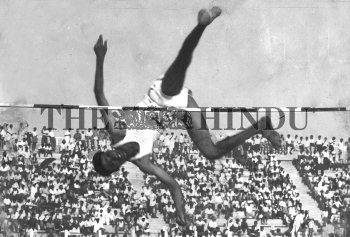 Caption : Mysore's Sridhar Alva clearing 1.89 metres to gain the first place in the running high jump event for men at the National Games held in Calcutta on February 28, 1964. The second man, Pathok (U.P.), also cleared the same height. (Published in the Sport And Pastime on March 28, 1964). PHOTO: THE HINDU ARCHIVES