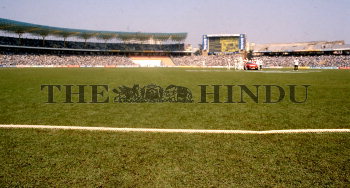 Caption : A view of the Eden Gardens ground taken from outside the boundary line during drinks break in the match between New Zealand and Zimbabwe during the Reliance World Cup 1987 in Calcutta on October 23, 1987. PHOTO: THE HINDU ARCHIVES