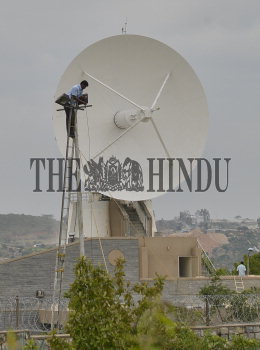 Caption : BANGALORE, KARNATAKA, 19/09/2014: A man putting up light on one of the antennas near the indigenously-built 32-metre dish antenna at Byalalu village near Bangalore, which (antenna) is being used for tracking India's spacecraft to Mars and for communicating with it. The antenna, which is the centrepiece of the Indian Deep Space Network (IDSN) of ISRO, has been receiving signals from India's Mars orbiter on the health of its payloads, the power generation on board the spacecraft and so on. After the Mars orbiter is inserted into the Martian orbit on September 24, 2014, the antenna will receive scientific information from the orbiter's five scientific instruments on the Martian mineralogy, its atmosphere, presence of methane etc. Scientists of the Indian Space Science Data Centre, situated on the same IDSN campus at Byalalu, will process this data, archive them and disseminate them to the scientific community. The entire antenna system weighs 350 tonnes. The dish with a diametre of 32 metres was designed by the Electronics Corporation of India Limited, Hyderabad. ISRO Telemetry, Tracking and Command Network (ISTRAC), ISRO Satellite Centre (ISAC), L and T, Godrej, and other industries played important roles in fabricating and assembling the antenna. This dish-antenna was used for the Chandrayaan-1 mission too, in Bangalore on September 19, 2014. Photo: K. Murali Kumar