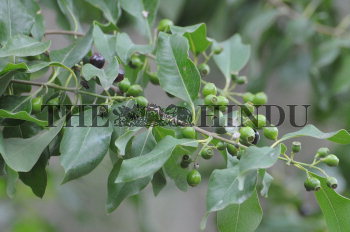 Caption : BANGALORE, KARNATAKA, 18/09/2014: A view of SandALWOOD tree riped fruits. In India, SandALWOOD is primarily distributed on the Deccan Plateau. The total extent of its distribution is approximately 9000 kms of which 8200 kms is located in Karnataka and Tamil Nadu. The heartwood of the fragrant tree is considered sacred and prized. The oil distilled from it, 60kg of oil per ton of heartwood, is used in the formulation of perfumes, lotions, soaps and candles. Mashed into a paste, it is used in folk medicine and spread on the skin to purify the complexion and heal rashes. It is dabbed on the forehead during religious ceremonies and burnt as incense in temples. The SandALWOOD industry employs thousands of people, especially in Mysore, known as 'SandALWOOD City'. Employees work in incense factories, rolling SandALWOOD paste on bamboo skewers. Craftsman carve the hard yellow wood into boxes, combs, beads and statues of Hindu gods and elephants. SandALWOOD is an evergreen tree which generally grows in the dry, deciduous forests of the Deccan Plateau. A circle with the city of Bangalore as its center and a radius of 200 km is the main zone of the natural distribution of SandALWOOD. It can grow to a height of 20 m and obtain a girth of 1.5m. It thrives best under rainfall conditions of 500-2000 mm and at elevations of 650-1200m. It can occur beyond these ranges , but under high rainfall conditions the heartwood formation is negligible. SandALWOOD is capable of growing in different kinds of soils like clay, sand, laterite, and loam. Even very poor or rocky soils can support SandALWOOD. Established plants start fruiting and regenerating naturally. Photo: G.P. Sampath Kumar