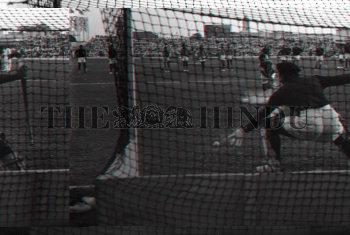 Caption : Players in action during the match between Bombay and Services in the National Hockey championship for Rangaswamy Cup at the Corporation Stadium in Madras on March 16, 1963. Services beat Bombay in the quarter-final by 1-0. PHOTO: THE HINDU ARCHIVES