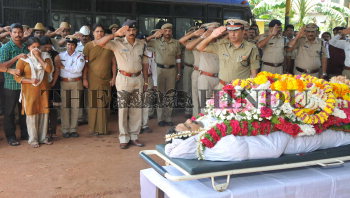 Caption : MANGALORE, KARNATAKA, 17/09/2014: Police Commissioner R. Hitendra and other police officials paying their last respects to Constable Bhaskar A.P., who died in an accident on September 17, 2014. Bhaskar's wife Anita is seen at the left. Mr. Bhaskar and his colleague and constable Ashwini Beeri were injured after the motorcycle they were riding was hit by a car near Bhagwan Mahaveer (Pumpwell) Junction. Bhaskar died a few minutes after the accident. Photo: R. Eswarraj