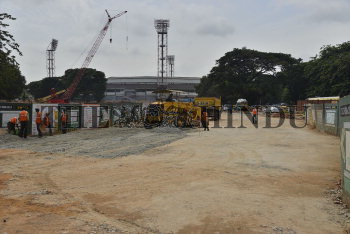 Caption : BANGALORE, KARNATAKA, 17/09/2014: With most of the work being completed at Cubbon Park underground station of Namma Metro Phase 1, at Minsk Square, by Bangalore Metro Rail Corporation Limited (BMRCL), underground network on the East-West corridor linking Byappanahalli to Mysore Road Terminal, on Cubbon Road-Queen's Road junction, and the opening of Cubbon Road to traffic can be expected in a couple of weeks, in Bangalore. Photo: K. Murali Kumar