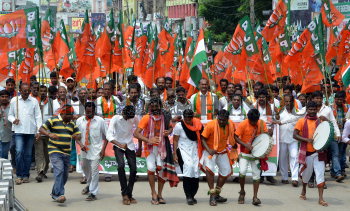 Caption : KHAMMAM, TELANGANA, 17/09/2014: BJP activists trying to enter the collector office in Khammam on Wedensday, September 17, 2014, demanding that the State Government should make an announcement that the Telangana Liberation Day on September 17 would be celebrated officially. Photo: GN. Rao