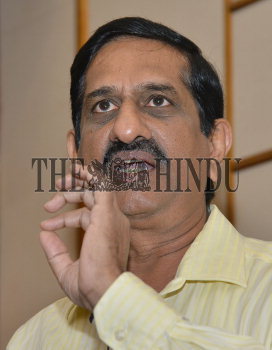 Caption : BANGALORE, KARNATAKA, 15/09/2014: The Scientific Secretary of Indian Space Research Organisation (ISRO) V. Koteswara Rao gestures as he speaks to media regarding India's Mars Orbiter Mission (MOM) at the Indian Space Research Organisation (ISRO) Telemetry, Tracking and Command Network (ISTRAC) in Bangalore on September 15, 2014. ISTRAC is the centre of India's Mangalyaan mission to Mars. As the orbiter spacecraft near its destination on September 24, ISRO scientists are preparing to restart an onboard engine that has been dormant for ten months and attempt a critical manoeuvre of the spacecraft. Photo: K. Murali Kumar