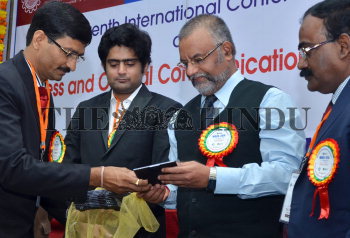 Caption : VIJAYAWADA, ANDHRA PRADESH, 12-09-2014: DST advisor K.R. Murali Mohan and KLU vice-president Koneru Raja Hareen having a look at the CDs after releasing them at conference on ‘Wireless and Optical Communication Networks’ on the university campus at Vaddeswaram near Vijayawada on Friday, September 12, 2014. Photo: V. Raju