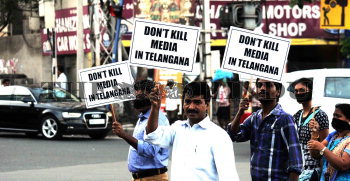 Caption : HYDERABAD. 11/09/2014: War between Electronic Media and Government hit streets with employees of two television news CHANNELS ABN and TV9 stage silent protest to seek public support at busiest traffic junction in Jubilee Hills of Hyderabad on Thursday, September 11, 2014. In its first show of administrative muscle, the Telangana Rashtra Samithi government has launched a proxy war of sorts against television CHANNELS not favourable to it and cracked down on both CHANNELS. Photo: Mohammed Yousuf