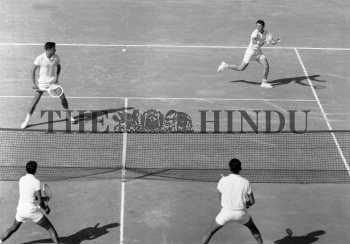 Caption : A.Palafox (right) and R. Osuna (left) of Mexico, in action against Premjit Lall and J. Mukerjea of India, during their men's singles final of the Davis Cup Inter Zone tennis championship at the Island Ground in Madras on December 04, 1962. PHOTO: THE HINDU ARCHIVES