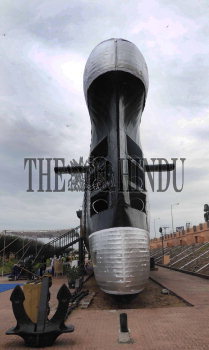 Caption : VISAKHAPATNAM, ANDHRA PRADESH, 10-9-2014: INS Kursura, the fourth in the Foxtrot class submarine, was commissioned into the Indian Navy on December 18, 1969 and the 'sentinel of the sea' was finally beached and converted to a museum on August 9, 2002 in Visakhapatnam. Vice Admiral Pasricha who was then the FOC-in-C Eastern Naval Command was responsible for the beaching of the Kalvari class submarine and converting it into a museum. Photo: CV. Subrahmanyam