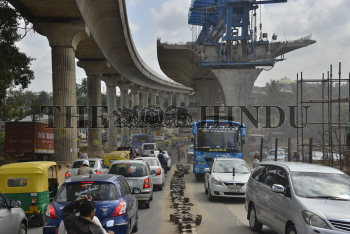 Caption : BANGALORE, KARNATAKA, 10/09/2014: Slow progress of the work on two major infrastructure projects Namma Metro and construction of two-level flyover at the junction of Mysore Road and Outer Ring Road (ORR) near Nayandahalli, executed by the Bangalore Development Authority (BDA), claimed to be first of its kind in the city to form a signal-free corridor at the junction, has been dragging for almost five years now. It was supposed to be completed in March 2012, but only half finished. Mysore Road has been reduced to almost half its width forcing motorists to crawl amidst rubble and clouds of dust. Road-users alleges that both the civic agencies have thrown safety norms to the winds even as they have been creating considerable risk and hardship to road-users. Photo: K. Murali Kumar