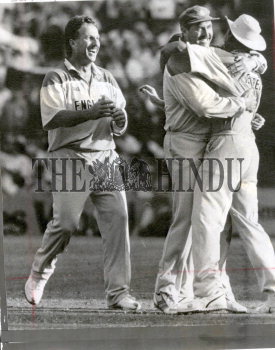 Caption : Man of the match Ian Botham is all smiles, while the England skipper Graham Gooch (centre) hugs DeFreitas, who held a catch from Australian Craig McDermott, which gave Botham his fourth wicket in the World Cup match at Sydney on March 05, 1992. Botham later shared a 107-run first wicket stand with Gooch. England won by eight wickets. PHOTO: THE HINDU ARCHIVES