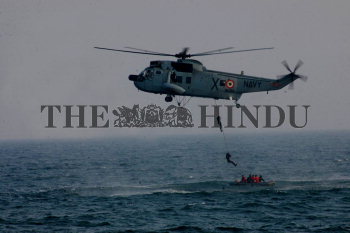 Caption : VISAKHAPATNAM, 02/12/2007: Marine commandos team being shifted by an helicopter for an assualt on an oil bunker at Ramakrishna Beach as part of Navy Day in Visakhapatnam on December 02, 2007. Photo: C.V. Subrahmanyam