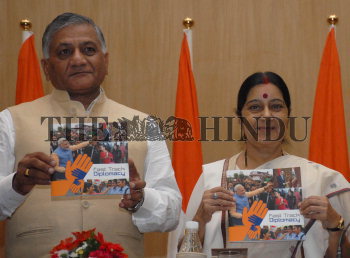 Caption : Union Minister for External Affairs, Sushma Swaraj, along with the Minister of State for External Affairs, General (retd.) V.K. Singh (left), releasing the booklet "Fast Track Diplomacy" at a press conference in New Delhi on September 8, 2014. Presenting the track record of her Ministry at her first press conference, Ms. Swaraj said the National Democratic Alliance government’s diplomacy so far has been “strong, sensitive and proactive.” Photo: Kamal Narang