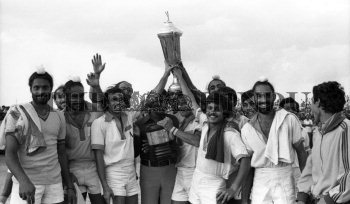 Caption : The Indian Airlines team celebrates with the Rangaswamy Cup after winning the National hockey championship held at the Race Course Stadium in Madurai on September 02, 1978. Indian Airlines beat Indian Railways to win the cup. PHOTO: THE HINDU ARCHIVES