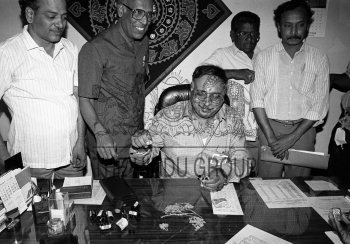 Caption : The Additional Collector of Customs, Madras, Mr.Anil Taneja along with team of Air Intelligence Unit of the Customs Department, examined the seized 10 film rolls from passenger who wound "gold chains" on the spools and covered them with photo film with help of adhesive tape. The seizure was affected from a 27 year old passenger who arrived by the Singapore Airlines flight on February 26, 1992. PHOTO: THE HINDU ARCHIVES