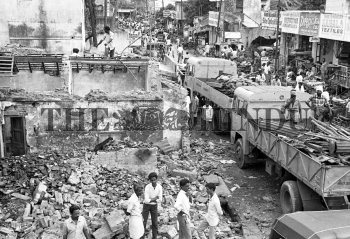 Caption : The Highways department yesterday paved the way for the construction of a subway near St. Thomas Mount railway station by commencing work on demolition of properties it had acquired on ADAMBAKKAM side. The PWD Minister, Mr. S. Kannapan, had a meeting on Sunday with the property owners who were persuaded to cooperate with the Government for expediting the subway project. (Picture taken on August 05, 1991) PHOTO: THE HINDU ARCHIVES