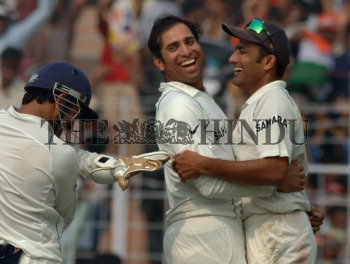 Caption : KOLKATA, 03/12/2007: India's V.V.S. Laxman (middle) celebrates with skipper Anil Kumble after getting the wicket of Pakistan batsman Mohammad Sami (not in pic) on the fourth day of the second cricket Test match between India and Pakistan at the Eden Gardens in Kolkata on December 03, 2007. Photo: K.R. Deepak