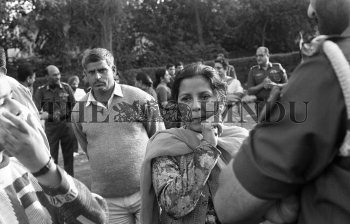 Caption : On the eve of Defence Investiture Ceremony, the Chief of the Army Staff, General Shanker Roychowdhary, today gave a patient hearing to a group of war-widows whose husbands are the posthumous recipients of the gallantry awards, to be given away by the President Dr Shankar Dayal Sharma, at the Rashtrapati Bhavan tomorrow. (Picture taken on March 12, 1995) PHOTO: THE HINDU ARCHIVES