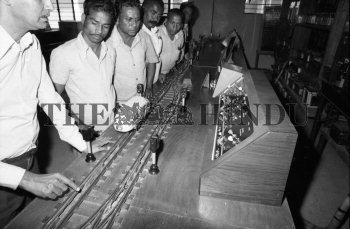 Caption : An executive demonstrates the procedure for Railway Track Circuits and Grounding at the exhibition organised by the (IRSTE) Institution of Railway Signal and Telecommunication Engineers in Hyderabad. The theme of the demonstration is 'Adoption of appropriate technologies for capacity augmentation, safety enhancement and reliability excellence on Indian Railways. (Picture taken during the month of January 1979) PHOTO: THE HINDU ARCHIVES