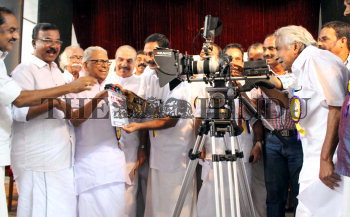 Caption : THIRUVANANTHAPURAM, KERALA, 01/08/2014: Chief Minister Oommen Chandy and Leader of Opposition V.S. Achuthanandan launch the FILMING of a documentary on former Minister the late P.T. Chacko on the occasion of his 50th death anniversary in Thiruvananthapuram on August 01, 2014. Photo: S. Gopakumar