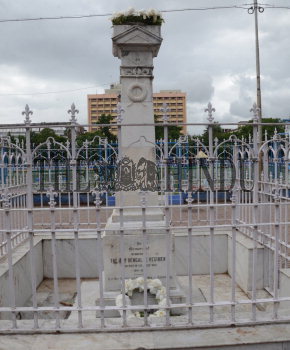 Caption : KOLKATA, WEST BENGAL, 28/07/2014: in poor state: A lone wreath, on the 100th anniversary of the World War I on Monday, lies at the base of the memorial, which was constructed in honour of 49 Bengali soldiers, who sacrificed their lives fighting for the British Indian Army during the World War I in 1914. The war even saw the participation of renowned poet Kazi Nazrul Islam, who was then part of the British Indian Army. The memorial, constructed in central Kolkata’s College Square, is now a picture of neglect. With very little conservation done to preserve the glory of the forgotten martyrs, the names of the soldiers, which were carved on the memorial, are fast losing visibility. Photo: Sushanta Patronobish 28/07/2014