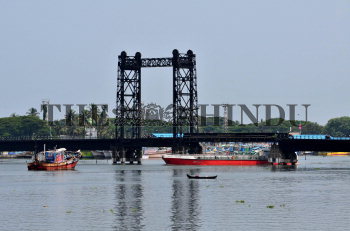 Caption : KOCHI, KERALA,A25/07/2014: The Thoppumpady harbour Bridge, famously known as ``Pokkupalam', built by the British in the pre-independence period . The bridge, which was once the main stay of West Kochiites, now lies in a neglected state. Photo: Vipin Chandran