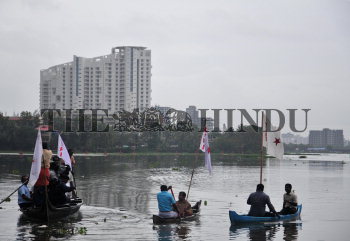 Caption : KOCHI, KERALA, 23/07/2014: Activists of the Democratic Youth Federation of India conduct a protest in front of the DLF apartment complex at Chilavannoor in Kochi on July 23, 2014. According to the report of the CAG, which listed the 11 builders, including the DLF in Chilavannoor area, who violated the Coastal Regulation Zone (CRZ) norms. Photo: Vipin Chandran