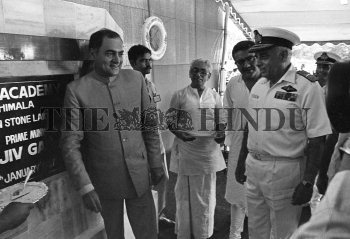 Caption : The Prime Minister, Mr. Rajiv Gandhi, who laid the foundation stone for a naval academy at Ezhimala, in Cannanore district, Kerala, on January 17, 1987, unveils a plaque to mark the occasion. Kerala's Chief Minister, Mr. K. Karunakaran, Mr. Arun Singh, Union Minister of State for Defence, and the Chief of the Naval Staff, Admiral Tahiliani, look on. PHOTO: THE HINDU ARCHIVES