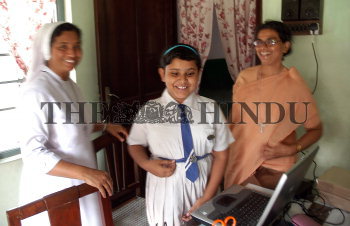 Caption : Kolkata: Sneha Tripathi, the terror stricken student photograph was published in our paper on Nov. 22, 2007 had received overwhelmed response from the readers on the mob violence in Kolkata on Nov.21, 2007, protesting over the issue of the grant of visa to Bangladeshi writer Taslima Nasrin. The photojournalist met her again after a week on same Wednesday morning at her Holy Child School in Kolkata. She is studying in class IV. She recalls the violence and soon conveys that she does not want to face it again in her "City of Joy". Photo : Arunangsu Roy Chowdhury. Kolkata. November 22, 2007.