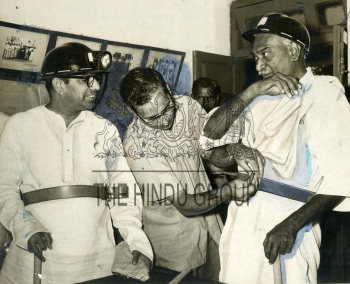 Caption : Mr. C. Subramaniam (left), Union Minister for Steel and Heavy Industry, looks on as Mr. K. Kamaraj, is being fitted with the miner's outfit before going into the Singareni Collieries mines at Kothagudem in Andhra Pradesh, which the Madras Chief Minister visited on July 10, 1963. (Pubd. on July 13, 1963) PHOTO: THE HINDU ARCHIVES