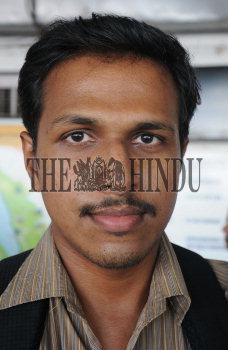 Caption : KOCHI, KERALA, 08/07/2014: Anil Rajan, a commuter from Thrissur says "It seems the Railway Minister has totally neglected the two railway stations in Kochi, which badly needs new projects, and the short-distance travellers", during an interaction with The Hindu over the Railway budget on July 08, 2014. Photo: K.K. Mustafah