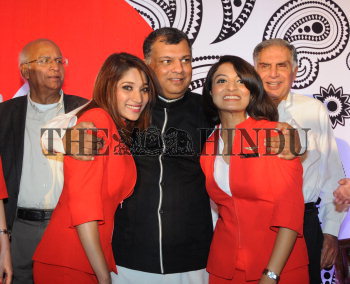 Caption : BANGALORE, 03/07/2014: S. Ramadorai (left), Chairman of the national Skill Development Agency (NSDA), Tony Fernandes (middle), CEO, Air Asia Group and Ratan Tata (right), Former Chairman, Tata Sons, along with air hostesses at a press conference to celebrate the launch of AirAsia India, in Bangalore on July 3, 2014. Ratan Tata is the Chief Advisor to AirAsia India and Ramadorai is Chairman of the board of the airline. Photo: G.R.N. Somashekar