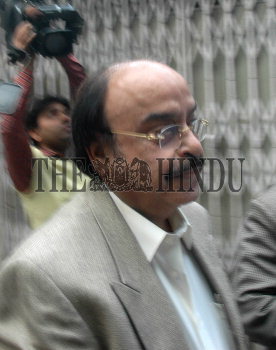 Caption : NEW DELHI, 23/11/2007: Gopal Ansal who appeared at Patiala House Courts, during the final judgement in the Uphaar case in New Delhi on November 23, 2007. He, along with Sushil Ansal, were sentenced to two-year rigorous imprisonment. Photo: Sandeep Saxena