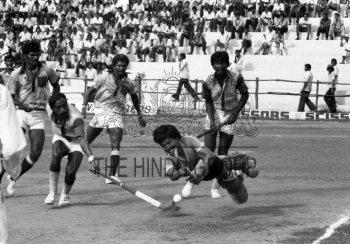 Caption : MURUGAPPA GOLD CUP HOCKEY: CRP's goal-keeper Gurung is airborne as he clean the bill away from a push by ASC's forward Vincent Lakra in the second-leg final of the Murugappa Gold Cup hockey tournament at the Egmore Stadium in Madras on June 28, 1980. ASC's winger Lelckand Bengra (right) and CRP's Simon Topno (centre) are also seen in the picture. CRP regained the Gold Cup with an aggregate of 4-1 in the two leg final. PHOTO: THE HINDU ARCHIVES