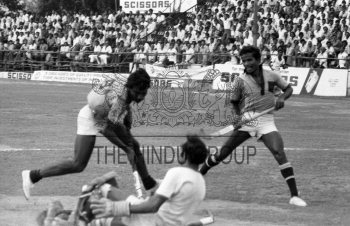 Caption : MURUGAPPA GOLD CUP HOCKEY: Players seen in action during the final between ASC and CRP at the Egmore Stadium in Madras on June 28, 1980. CRP regained the Gold Cup with an aggregate of 4-1 in the two leg final. PHOTO: THE HINDU ARCHIVES