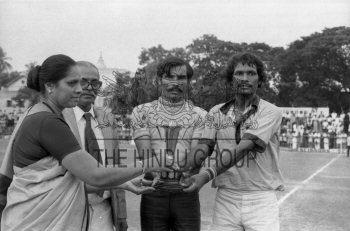 Caption : Habil Khujur (right), captain of the Central Reserve Police, receiving the Gold Cup from Mrs. K. R. Shenai, wife of the Director General of Police, during the prize distribution ceremony of the Murugappa Gold Cup Hockey tournament at the Egmore Stadium in Madras on June 28, 1980. PHOTO: THE HINDU ARCHIVES