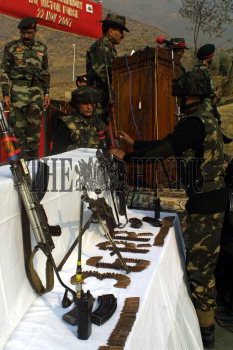 Caption : SRINAGAR, 22/11/2007: The weapons surrendered by HUJI and HM militants displayed during a surrender ceremony in Awantipura as 6 dreaded militants hailing from Doda district of Jammu and Kashmir surrendered before the GOC 15 Corps A.S.Sekhon and pledged to join the main stream, in Srinagar on November 22, 2007. Photo: Nissar Ahmad