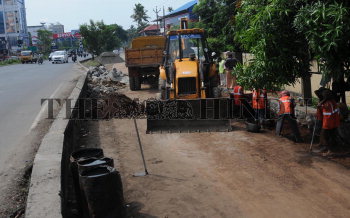 Caption : KOCHI, KERALA, 30/05/2014: Workers engaged in raising the service road level at Palarivattom Junction's northern side on May 30, 2014. Chief Minister Ommen Chandy will lay the foundation stone for a flyover proposed at the junction by Roads and Bridges Development Corporation of Kerala (RBDCK). The agency had fixed January 2014 as the deadline to commence work, but is set to commence work just before the annual monsoon. It has promised to commission the flyover within 18 months of commencing work. The total project cost is Rs.72.60 crore, of which Rs.16 crore is for acquiring 55 cents of land. Photo: K.K. Mustafah