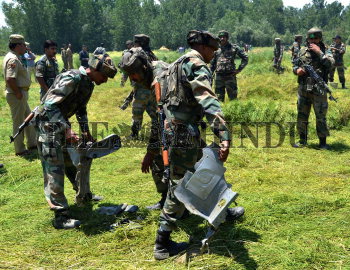 Caption : SRINAGAR, JAMMU AND KASHMIR, 27/05/2014: Army and Air Force jawans recover the wreckage of an Indian Air Force fighter plane (MIG-21) that crashed near Mirhama, Bijbehara area of Anantnag in Jammu and Kashmir on May 27, 2014. Photo: Nissar Ahmad