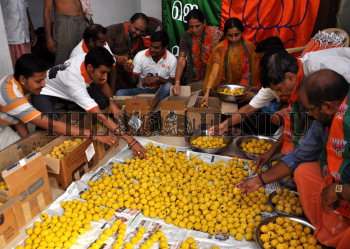 Caption : KOCHI, KERALA, 15/05/2014: Anticipating Bharatiya Janata Party's victory in the Lok Sabha elections, party workers in Kochi arranging ladoos in boxes to be distributed across the city after counting is over on May 15, 2014. Photo: Vipin Chandran