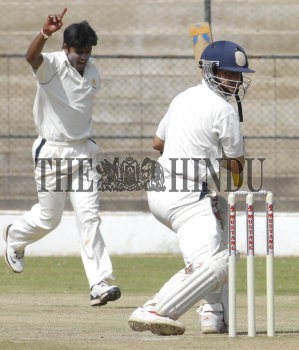 Caption : BANGALORE,17/11/2007: Karnataka's Vinay Kumar after taking the wicket of Ajay Manu in the 2nd innings during the Ranji Trophy Elite Group "A" cricket match between Himachal Pradesh and Karnataka at Chinnaswamy stadium in Bangalore on November 17, 2007. Photo: K. Bhagya Prakash