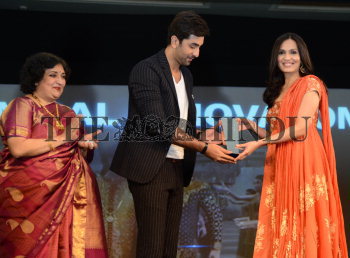 Caption : NEW DELHI, 29/04/2014: CALLING the SHOTS SOUNDARYA Rajnikanth Ashwin receiving the NDTV Indian of the Year Award for Technical Innovation in Film from actor Ranbir Kapoor, while her mother looks on at the function, in New Delhi on Tuesday. Photo: Sandeep Saxena