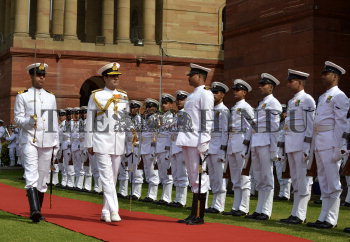 Caption : NEW DELHI, 17/04/2014: New Chief of the Naval Staff, Admiral Robin K Dhowan taking the guard of honour before assuming the charge after former Chief, Admiral D.K. Joshi resigned on 26th February, in New Delhi on April 17, 2014. Following a number of mishaps involving naval warships over the last seven months, Joshi had resigned his post taking "moral responsibility" for the incidences. It was the first time in the last 15 years that a Naval Chief had to leave office in controversial circumstances. Photo: Rajeev Bhatt