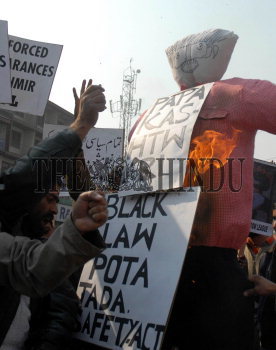 Caption : SRINAGAR, 13/11/2007: Activists of Jammu and Kashmir Freedom League holding placards during a protest in Srinagar on November 13, 2007. Dozens of activists of various political parties held a protest against what they say are human rights violations on Kashmir people by security forces. Photo: Nissar Ahmad