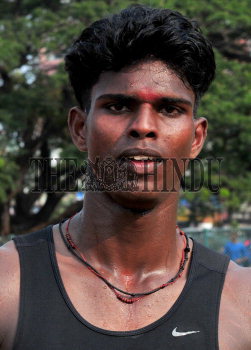 Caption : Thiruvananthapuram's U. Nithin who broke the 100m boys record and emerged as the fastest athlete in the 4th Kerala State youth athletics championship in Kochi on April 6, 2014. Photo: Vipin Chandran